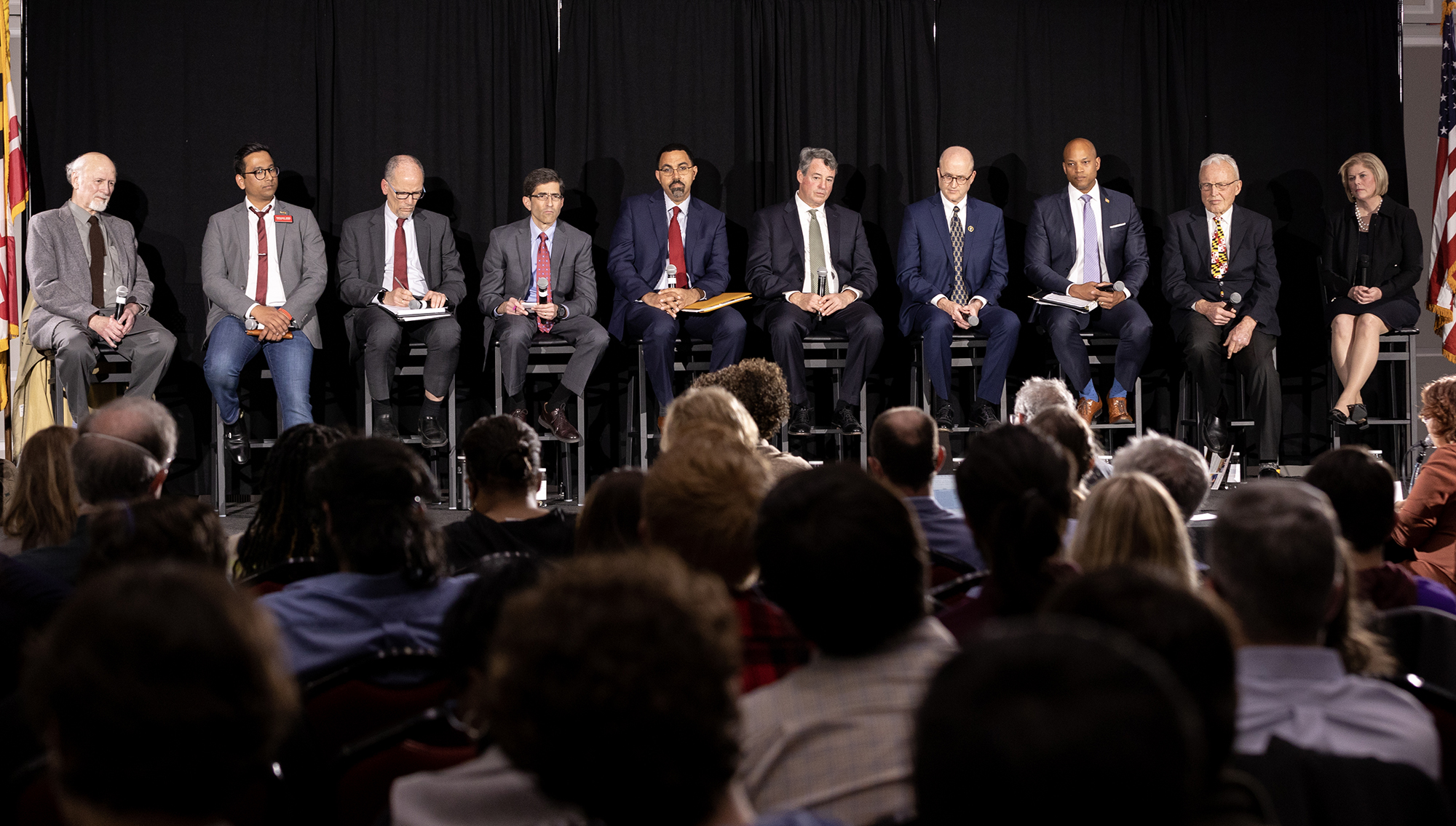 The candidate filing deadline for this year’s gubernatorial election in Maryland passed on April 15. Now, the stage is set for a crowded primary race among both Republican and Democratic hopefuls.

The primary elections will take place July 19, with early voting set to begin July 7. There are currently 10 Democratic candidates vying for the party’s nomination and four Republicans.

Many Democratic candidates agree on top priorities of improving public education and addressing climate change but differed on plans to expand the state’s public transportation infrastructure. Republican front-runners are also embroiled in a battle between Trump-era politics and moderate Republican policies.

Here is a summary of key platforms from each party’s frontrunners.

Democrat Rushern Baker III entered politics in 1994 and served in the Maryland House of Delegates until 2003. The two-term Prince George’s County Executive ran unsuccessfully in the Democratic primary for governor in 2018. He has been out of office since 2018.

The former county executive’s number one campaign priority is improving the state’s education system, according to his campaign website. Baker told WBAL-TV in an April 16 interview that his administration would follow through on the Blueprint for Maryland’s Future program, a landmark piece of legislation passed in 2021 that made changes to Maryland’s early childhood and public schools. The program provides increased support for impoverished students, expands all-day preschool access and bolsters college readiness curriculum for high schoolers, among other things.

“It’s not just inside the school walls. The school does not control health care. They do not control economic development,” Baker said during a gubernatorial debate at Coppin State University on Tuesday. “You need the entire government to understand it. As a governor, I do, and I will change it.”

In addition to education improvements, Baker has highlighted the need for economic development and jobs in the state through many of his campaign promises. He also plans to “improve and modernize” the state’s transportation system, he told WBAL.

Baker also touts his campaign for its use of public financing and rejection of the “dark money [that] has corrupted our political system for too long,” according to his campaign website.

Republican Dan Cox is currently a member of the Maryland House of Delegates, representing Carroll and Frederick counties in District 4. Cox served as the secretary of the Frederick County Republican Central Committee from 2018 to 2021.

Cox holds the endorsement of former President Donald Trump and has embraced much of his rhetoric, including repeating false claims that Trump won the 2020 presidential election and playing a role in the Jan. 6, 2021 insurrection at the U.S. Capitol.

The delegate’s main campaign issues revolve around the restoration of parental rights, support for law enforcement officers and defending the Second Amendment.

“My opponents — all of them — are silent about Maryland schools adding curriculum to indoctrinate your kids as young as four with gender identity and expression confusion,” Cox said in a Tweet early April. “Join us as we stand with parents and children.”

With his chief competitor being Maryland Gov. Larry Hogan-backed Kelly Schulz, many experts see the Republican primary race as indicative of the fight between Trump-era politics and the state’s traditional Republican establishment.

Franchot has served as comptroller — supervising the quality of accounting and financial reporting for the state government — since 2007. He represented Montgomery County in the Maryland House of Delegates from 1986 to 2007.

On the campaign trail, Franchot has emphasized his ability to mitigate the state’s financial recovery from the COVID-19 pandemic in his comptroller role. His top priorities, according to his website, include small business investment, improving the public education system and taking action on climate change.

His campaign has pledged many lofty goals. If he prevails in the primaries and wins the gubernatorial election, Franchot will look to make Maryland the first carbon net-zero state in the country, create 100,000 jobs in 100 weeks and build a “world-class, integrated and statewide transportation system.”

Franchot has seen a wave of support from more than 100 current and former elected officials. Laura Neuman, the only woman seeking the Democratic nomination in the primary who dropped out last month, has also thrown her support behind Franchot.

Former Maryland Attorney General and Democratic hopeful Doug Gansler has gathered the support of more than 40 current and former attorneys general during his gubernatorial campaign.

Gansler, who has served as a state attorney for Montgomery County and the Maryland Attorney General, made his last gubernatorial bid in 2014 but lost in the primaries.

The campaign’s top priorities include expanding services and accessibility for Marylanders with disabilities, combatting climate change, providing support for veterans and increasing mental health care as the state emerges from the pandemic.

Gansler has also emphasized support for economic recovery from the pandemic and combatting crime using his background in criminal justice. The state is facing crises of climate change, COVID-19 and criminal justice, he told Maryland Matters. He believes he is the only candidate with significant experience to lead the state’s recovery.

“We need to be more innovative and imaginative in how we police in our state, but we also have to recognize that crime is out of control,” Gansler told WMDT Salisbury in March. “We’re in a time of crisis, and I’m the only person in the race that’s actually led during times of crisis.”

John King — a former Obama-era education secretary and leader of an education civil rights organization — has spent his career in education and government but has never sought public office.

The Democrat launched his campaign in April 2021 with an emphasis that he would be the first Black governor of Maryland.

King is focusing on fighting climate change, improving the state’s public school system and breaking down structural barriers that hinder economic development for people of color.

King’s overarching principle is “The Black Agenda,” which aims to “turn rhetoric into action” in combating systemic racism. Part of King’s plan to uphold this agenda is a promise to require a Racial Equity Impact Statement to be submitted with every bill that makes it to his desk.

In a campaign ad, King has also taken aim at recent controversies over how issues of racism and slavery are taught in public schools.

“The truth is, today’s gaps in health, wealth and criminal justice are tied to the history of slavery, segregation and redlining,” King said in the ad. “We’re strong enough to acknowledge injustice and see the power of progress.”

Wes Moore has been an author, military combat veteran and CEO of a charitable foundation. Now, the Democrat is looking to take these experiences to the Governor’s Mansion on his first try at running for elected office.

Moore’s primary focus as governor will be improving economic opportunity for Marylanders, he told ABC 7 News last month. He also hopes to fight violent crime in the state by fixing the state’s “broken” parole and probation system, as well as funding violence interruption programs — which could include nontraditional actors helping mitigate violence in communities where it occurs.

He has also made waves with some high-profile endorsements. He nabbed the endorsement of the Maryland State Education Association — one of the most coveted endorsements in state politics — last month. The union represents about 76,000 educators and school employees in the state.

His campaign has also become embroiled in controversy after multiple news outlets pointed out that Moore, who was born in Takoma Park, and confirmed this information in his first book, did not correct interviewers over the last decade who referred to him as Baltimore born-and-raised. And at times, Moore has fed into that impression himself.

The discrepancy has become a talking point in the gubernatorial race. Last month, his campaign sent a letter to the State Board of Elections alleging that “false and disparaging information” had been spread about Moore in “an orchestrated attempt” to disparage him.

Democratic hopeful Tom Perez has had a long career in government, which includes stints at the federal, state and local levels. The former Obama-era U.S. labor secretary and Maryland labor secretary is campaigning on the basis of topics such as economic stability, affordable health care, racial equity and public education.

Perez is also prioritizing climate change policy and expansion of public transit in the state. He is the former chair of the Democratic National Committee and took on the role just three months after the 2016 election.

Perez also boasts dozens of endorsements from current lawmakers in the Maryland General Assembly and unions around the state.

“My career has been about jobs, justice and opportunity for everyone, and the next governor needs to work tirelessly to ensure that ZIP code never determines destiny, so that opportunities are available to everyone,” Perez told WBAL-TV Baltimore last month.

Perez has used his connections to the former president in his campaign ads, which hit the airwaves in March and includes footage of President Obama praising him.

“He is tireless; he is wicked smart,” Obama said in the ad. “If you look at his body of work on behalf of working people, he has been extraordinary.”

Kelly Schulz is among the primary candidates most connected to current Republican Gov. Larry Hogan. Hogan is term-limited and cannot seek reelection this year but threw his support behind Schulz, his former commerce secretary and longtime friend, in late March.

Hogan endorsed Schulz as the only candidate “who has the experience, the ability and the desire to keep moving Maryland forward, to keep changing Maryland for the better,” and to continue Hogan’s legacy. So far, Schulz is the establishment favorite among members of the state’s Republican Party.

Schulz spent seven years in Hogan’s administration. She served as labor secretary from 2015 to 2018 and assumed her role as commerce secretary beginning in 2019. In addition to her roles within the Hogan administration, she served in the Maryland House of Delegates representing Frederick County from 2011 to 2015.

The Republican is running her campaign on issues of education, confronting violent crime and economic development in the state. She has also emphasized her desire to expand small business support in the state, as a former small business owner herself.

Previous post Find Out Why it is Bad to Sleep or Lie Down After a Meal! Next post Is Your Rosacea Caused By Mites? +What To Do About It